Fr. Michael was born in Hammond, IN on November 4th, 1985. He was baptized at St. Demetrios Greek Orthodox Church in Hammond, IN by Fr. Peter Georgacakes. In the summer of 1986, he and his family moved to the suburbs of Pittsburgh, PA. He grew up attending the Dormition of the Theotokos Greek Orthodox Church in Oakmont, PA where Very Rev. Fr. Polycarp Rameas was his priest.

Being actively involved in GOYA, attending Camp Nazareth, and interacting with various clergy at these events, inspired him to want to serve the Church. He graduated from Plum Senior High School in June 2004, and that fall he enrolled at Hellenic College where he would major in Religious Studies. In the fall of 2008 he continued his education at Holy Cross Greek Orthodox School of Theology, graduating with a Masters of Divinity in May 2011.

While studying at Hellenic College / Holy Cross Greek Orthodox School of Theology, he worked in several different capacities at the Camping Programs of both the Greek Orthodox Metropolises of Pittsburgh, and Boston.

After graduating from Holy Cross, he managed a Pan-Orthodox Non-Profit Coffeehouse and Bookstore in Harrisburg, PA called Agia Sophia Coffee House & Bookstore. In August of 2012, he began as in intern at the Greek Orthodox Metropolis of Pittsburgh where he worked with the Chancellor of the Metropolis on various projects. 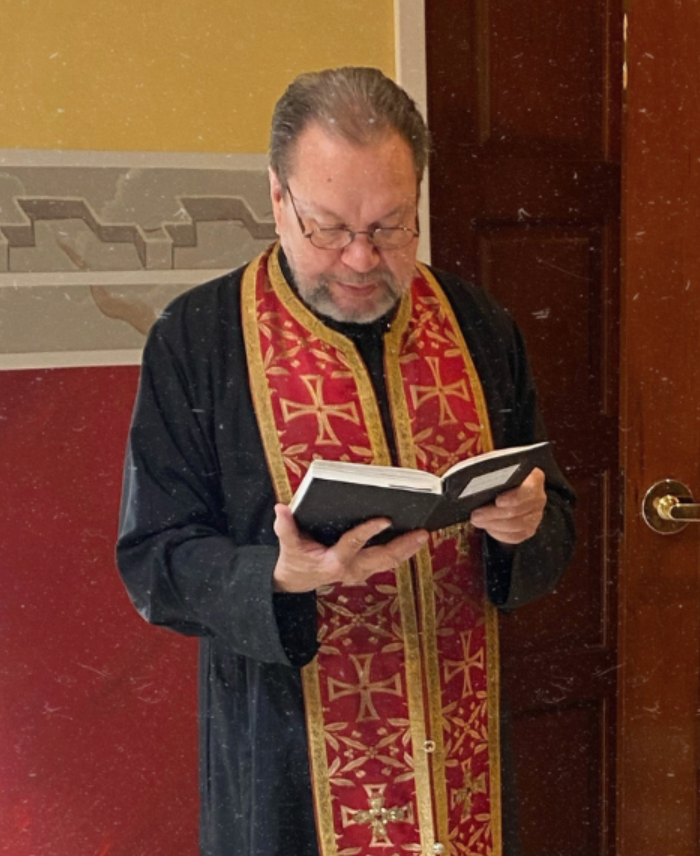 The Very Reverend Polycarp Rameas was born on the Pittsburgh's North Side on August 21, 1944, the only son of Kyriakos and Vasiliki (Bessie) Rameas. Christened Dionysios at the Holy Trinity Greek Orthodox Church of Pittsburgh's North Side, Father along with his sisters Elpida (Hope), Eleni (Elaine) and Zoe (Joy) were raised in a typical Greek-American home environment.

Upon his graduation from High School, Father's life-long commitment to serve the Church was made and he attended the Holy Cross Greek Orthodox Seminary in Boston, Massachusetts as well as the University of Athens, Greece, successfully training to become a Greek Orthodox Priest. Father has also earned degrees from Duquesne University of Pittsburgh and Christ the Savior Orthodox Seminary, in Johnstown, Pennsylvania, rounding out his education background.

In October 1975 he was assigned to serve the faithful at the Dormition of the Theotokos Greek Orthodox Church of Oakmont, Pennsylvania. In the 35 years Father has been at the Dormition Church, he has overseen the doubling of the membership of the parish and has encouraged the faithful in our successful efforts to double the size of the Church Hall and to build a Library and Classrooms for the religious education and Greek culture and language classes. Father has also inspired the parish to decorate the interior of our Church with traditional Byzantine Iconography and has encouraged the establishment of a strong Byzantine musical tradition at all of our services. During Father's tenure at the Dormition, he also has overseen the acquisition of the Hunt Marina Property for our parish as well as the establishment of an additional Social Hall for the use of the parish and our friends.

Patient, gentile and kind, Father's easygoing manner and love are among his great virtues, and represent a wonderful source of strength and inspiration for the entire Dormition Family.